The Revenant Chats With the Cast and Crew of Transylvania Television!!!

Greetings Ghoulies!!!  It's the Roadside Revenant here!  Today I have a Fangtastic Treat for all My Monster Kiddies!!!  I Recently had a Chit Chat With the Cast and Crew of Transylvania Television, the Beast Broadcast on the World Weird Web for All Monster Mavens and Fans of Fright!!!  Let's Dig in, Shall We???

Welcome to My Ossuary my Fiends!  Can I get Any of You Thing To Sup or Sip?  No?  Then Allow me to Turn Down This Lantern and We can Begin...

the Revenant ~ I should Like to ask the Vampire LeShoc Where he Gets his Stunning Wardrobe.  My Tombmate Orlock is in Dire Need of Some Fashion Help.  I'm Not Entirely Sure He Has Even Changed his Undergarments Since 1413... 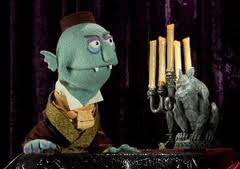 the Vampire Le Shoc ~ These Particular Garments I stole from the lifeless corpse of Tom Cruise after he did that atrocious Interview With A Vampire flick.  What?  What do you mean he isn't dead?  Dammit! I just can't trust discount lackeys these days.  Do I Have To Do EVERYTHING Myself??

the Revenant ~ Mistress Malicia our Literary Maven wanted to ask Dwayne Frankenstein the followwing...
Dwayne, I cannot Help Noticing Your Very Interesting Accent.  Would You Care to Enlighten us on Your Place of Origin and Perhaps Whatever Little Spare Bits you May Remember of Your Family? 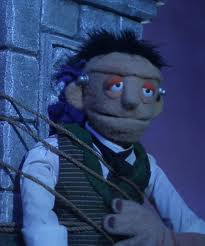 Dwayne Frankenstein ~ Hi!  I'm Dwayne! Hellooo!  My Place of origin may or maynot include Surrey, Oxford, Borneo, New Hampshire, Kokomo and Minneapolis.  It's Sometimes hard to tell.  Being made of 13 different people, my toes get confused sometimes.  Or was it my vocal cords?  I like Ponies.

the Revenant ~ Um,  Thanks You Dwayne.  Next Up, Orlock's Loathsome Pet, Alligatorman has a Question for Ratfink.  I shall Have to Interpret for Him Since His Communication's Consist Primarily of Incoherent Shouting and Hitting Things With Other Things.  Well, Here Goes... Ahem... Batfink, the 1960 Cadillac Landau Hearse vs. the 1957 Chevrolet Landau Hearse, which Is Better?  Um, I'm unsure About this Last Bit So I Will Give it to You Verbatim... * Hit Tree With Old Lady, Hit Tree again With Old Lady, Throw Old Lady Into Septic Pit... Stomp, Stomp, Lie Down and Fall Asleep *  Hmmm...

Ratfink ~ Man, a sweet ride is a sweet ride.  Just go with the flow.  But one thing I can tell you is that NO2 will make any car just that much more hep.  And did you know you can even hook that shit up to the engine?

the Revenant ~ I should Like to ask Furry J. Ackermonster, How Do you Deal With the Stresses of Working With such an, "Interesting" Bunch?  I Myself Have Been Suffering from a Touch of Workplace Ennui Lately...? 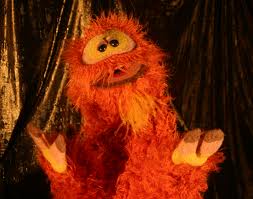 Furry J. Ackermonster ~ Honestly, It's not that much different from college.  But if you get too bummed out, you could always spool up the Star Wars Holiday Special.  When I get low, knowing that Disney is saddled with that crap now instead of George Lucas always Brightens my Day!

the Revenant ~  And Now for the Fiends behind the Funny!  C J Stone, Producer, Executive Producer, Writer and Script Girl of TvTv, Tell Me, How do You Go About Pulling Together an Episode? 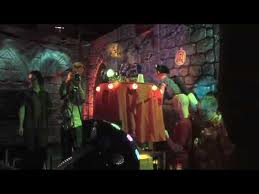 On the front end our process is kind of wild, a little like throwing spaghetti against the wall.  Actors, Writers and Crew pitch out ideas they've had, jokes they've thought of, skits or sketches and so on.  This goes on all the time - shoot breaks, lunch, writers' room, management meetings, all the time.  We're always looking for things we think are funny and we riff on them or monster them up and riff on that.

For example we have a white board in The Pit and we encourage everyone --EVERYONE-- to write Frankenstein Device smashmix titles up there, like "Are you there, Godzilla?  It's me Margaret","Uncle Tom's Cabin in the Woods", or "The Bloodsucker Proxy".  Sometimes we use those for something and sometimes they give us ideas for other things.

Most of the time, writers and producers will come in with some kind of story line.  Maybe 30 seconds, maybe a couple of minutes, whatever.  We're looking for the monster and the funny.  We take whatever we've got and we refine it or recycle it.  For example, I wrote a thing where a rat stole a cursed ring from LeShoc's office.  Furry caught him at it and chased him and the rat hid in the toilet.  Furry called Batfink for help -- Furry didn't want to go in because there was this scary music (theremin) every time he got near the door.  Batfink says, "Oh, Yeah.  Here we go!" and cut.  That never got produced, but the idea of "scary music out of nowhere" got recycled into the episode introducing Von Bucket. 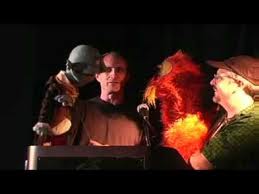 And so on.  Anything we can't shoot or refine, we try to recycle.  And we don't restrict our writers in any way.  Bring the Monster and Bring the Funny.  That's It.

Once we do have something, we start polishing.  All the XP's give it a read and check it for stuff we don't do, like politics or real religions.  Then we check it for mechanical things, like lines being traded in a ping-pong fashion, or someone who's strictly a straight man to an oncoming joke.  Then we start to read it for weak spots, places it could be funny when it isn't intended to be funny; places where it is funny but could be funnier; and places where it's really funny, but there might be something even funnier or a follow - on joke.

When that's all done, I put the script into the industry - standard format (courtesy of CelTx; it rocks and it's free).  Industry-standard format tells us how many minutes we are trying to shoot and if it's too much, we start cutting the script.  We have to balance between a minimum time for a video, about two minutes; and the maximum, about four minutes; and how much time we have to shoot a video.  Our ratio is about 60:1.  Yeah, you read that right: One minute of finished video is one HOUR in The Pit and post-production.  You can imagine how long it took us to shoot the Halloween Special Show.  So we must cut the script to fit the time we have available (or, for the live show on UStream, the slot we are trting to fill).

Finally, we put the script in the hands of the actors and rehearse-rehearse-rehearse.  Some things that look good on paper don't sound good when played; some things we write just can't be said by  puppet; sometimes we don't get the feel of the character right in the writing and the actor asks for changes.  Lots of different ways to change the material in rehearsal.

Really - finally, the actors often find funny things we didn't think of that is way funnier than what we wrote.  For instance, we might write the word "dick", and the actor tries out every synonym for "dick" he can think of - and one just pops out (pardon the pun).  We all bust out laughing and that's obviously the way to go.  And the actors improv to improve and that works.  Rehearsal is about the most valuable "bring the funny" time we have.

the Revenant ~ C J and Gordon, If you Could Meet Any Horror Icon, Alive, Dead or Undead, Who Would It Be???

C J Stone ~ Arch Oboler.  Scariest guy in radio.  Made me pee my pants by tearing a piece of paper. Nice Work!

Gordon ~ Strangely enough, I'm not that much of a horror fan.  I guess if I was really able to pick, I'd choose Vincent Price.  I hear he was a fantastic cook. 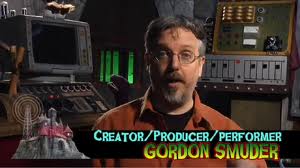 the Revenant ~ And Finally Fiends, any Hints as to Where the Crew of TvTv will Be Heading in the Future???

CJ Stone ~ We are not actively in production just now.  This year, we are marketing the Halloweener and what we call "the Houston Five" as a one week broadcast package to TV stations nationwide.  We're hoping to get seen by Someone Important and get a big bag of money.

That said, we are producing small things.  For instance, we did an introduction to the Star Wars Holiday Special, the worst train wreck you've never seen.  SWHS is show at Christmas by Chris Grap as a benefit for Toys for Tots.  He's been doing that six years and he wanted a new introduction, so we shot a new one.  That's showing here in the Twin Cities and Chris has announced it's also showing in New Orleans and LaCrosse, WI and maybe in Fargo , ND.  We also did a cross-pimp with Not Literally after we saw their video "Sorted this Way", a Harry Potter-Lady Gaga smashmix.  We still have The Pit, the sets and the puppets, so we bust out when we have a reason to!

the Revenant ~ My Most Humble Thanks to You all, The Cast and Crew of Transylvania Television for Answering My Queries and Taking Time away From The Pit!!!

And now My Dreary Dark Ones, Dig In and Visit Transylvania Television at:

Worship Them Oh My Monstrous Minions!!! 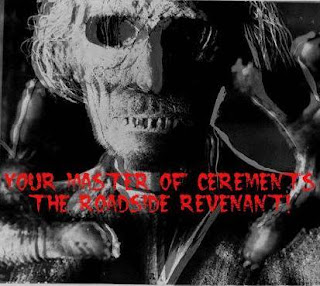 Posted by The Roadside Revenant at Tuesday, December 11, 2012 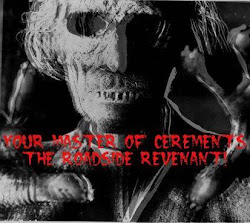 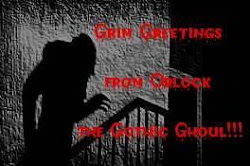 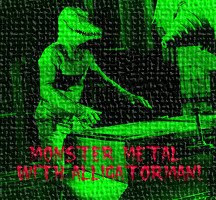 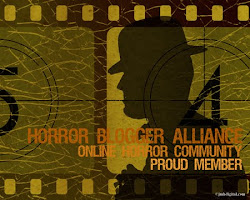 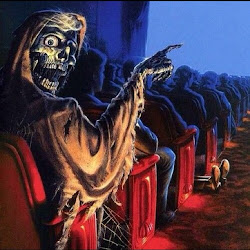 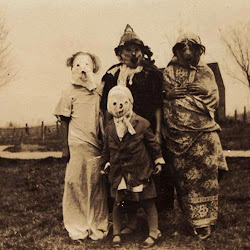